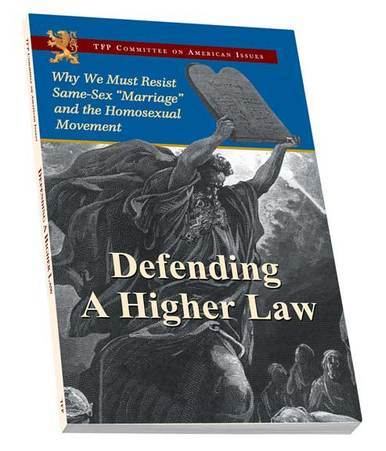 The hard-hitting book, Defending a Higher Law: Why We Must Resist Same-sex “Marriage” and the Homosexual Movement, outlines the dangers that the homosexual agenda poses to society, refutes common myths concerning homosexuality and clearly outlines Church teaching on the sin of sodomy.

The book has been acclaimed by pro-family and Catholic leaders worldwide. It received letters of recommendation from Cardinal Jorge A. Medina, Cardinal Janis Pujats, Bishops Bruskewitz, Vasa and Nienstedt as well as EWTN host Fr. John Trigilio, President of the National Association for Research and Therapy of Homosexuals, Joseph Nicolosi and former President of Concerned Women for America, Sandy Rios.

Archbishop Elden Francis Curtiss of Omaha, Nebr. reviewed the work. He said the 232-page book “addresses virtually every conceivable point in the debate on homosexual marriage (semantic, scientific, social, scriptural, moral).” He continued: “The paper is written with impeccable logic in virtually every section. In some ways it almost reads like a modern format of the Summa Theologica where the opponent’s arguments are laid out and then refuted. The authors are fully in conformity with the teachings of the Church and argue for the Church’s teaching passionately.”

Currently in its fifth English printing, it has also been translated to Spanish, French, Polish, Lithuanian, Latvian, Portuguese, German and Estonian.