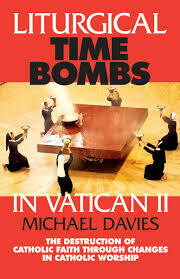 Michael Davies shows how Fr. Annibale Bugnini--before his dismissal by Pope Paul VI under suspicion of being a Freemason--was able to "reform" the Catholic Mass into the constantly evolving liturgy. Quoting Bishops and Cardinals as well as liberal "experts" and Protestant observers, he exposes the "time bombs" which were built into the Second Vatican Council's document on the liturgy by a few revolutionaries in order to be exploited later--and which have been detonating ever since. "I am convinced that the crisis in the Church that we are experiencing is to a large extent due to the disintegration of the liturgy."--Cardinal Ratzinger (now Pope Benedict XVI), 1998. 121 pgs,