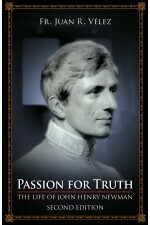 Passion for Truth - The Life of John Henry Newman

John Henry Newman, now officially declared a saint by the Catholic Church, was a talented Anglican clergyman and teacher at Oxford University. After founding the Oxford Movement, he embarked on a long period of study and prayer which eventually led him in 1845 to full communion with the Catholic Church. He is one of the most influential English writers and theologians of modern times. In Passion for Truth, Fr. Juan R. Vélez offers an engaging biography of this profound thinker, holy priest and later Cardinal of the Catholic Church. Newman continues to speak to many of the spiritual and intellectual questions of our times. 656 pages.