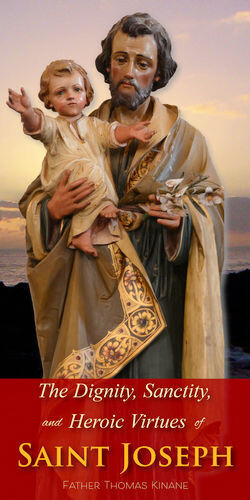 This booklet is a compilation of excerpts from a larger version of “St Joseph - His Life, His Virtues, His Privileges, His Power”, by Father Thomas Kinane.

There is, perhaps, no saint in the calendar of whom less is generally known than of St. Joseph. One out of every ten thousand otherwise well-informed Catholics could not tell you anything concerning him, beyond the fact that he was the foster father of Our Lord and the husband of Our Blessed Lady; that he is supposed to have been a carpenter by trade, and that he contributed, as such, to the support of Our Divine Saviour during a considerable portion of his life. Indeed, the Sacred Scripture speaks but seldom of him. It tells us, however, the all-sufficient truth that he was “the husband of Mary.” It tells us, moreover, that an angel revealed to him the miraculous conception of the Incarnate Word; that he was present in the stable of Bethlehem when the Wise Men from the East came to adore their new-born King; that he was admonished by a celestial messenger to fly into Egypt with the Divine Infant and His Mother; that he did so; that, after a rather protracted stay in that country, he returned home; and that he was certainly alive when Our Lord had attained the twelfth year of His age.

But when he was born; how old he was when he espoused the Blessed Virgin; when and where he died and was buried; what became of his remains, of which absolutely no trace has been found; when precisely he was first publicly honoured as a saint in the Church: these are points, together with countless others, of greater or less consequence, on which the ordinary Catholic mind is wholly uninformed.

All these interesting questions are proposed in the Fr Kinane’s “ Life of St. Joseph,” and treated by him with much felicity of expression, singular clearness, great wealth of argument and illustration, and with that peculiar warmth, that compactness and solidity of construction for which his other literary efforts are so justly and so generally commended.