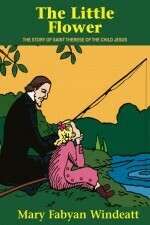 "Papa, what's the new baby's name?" asked one of the Martin girls.

Little Thérèse was "the baby" of the Martin family. She was also her Papa's "Little Queen." With her Mama, her Papa and her 4 big sisters to love her, Thérèse could have turned out to be a very spoiled little girl. And indeed, it is true that sometimes she was cross and naughty.

But Thérèse had hit upon a plan: she had decided to become a saint. To do this, she would love God every minute and would always say, "Yes" to whatever He asked of her.

Would this really make Thérèse into a saint? Wasn't it too easy? Or maybe it would sometimes be too hard? And wouldn't Therese forget about her plan as she grew older?

This book tells what happened to "Little" Thérèse: It shows how Thérèse received a second mother when she lost her first mother, how she was teased at school, and how she was cured of being a crybaby. It tells about her mysterious illness, her miraculous cure, her First Holy Communion, the terrible criminal whose soul she won back for God, and what she decided to do when she grew up.

All in all, here is the wonderful true story of what happened when little Thérèse Martin set out to become a saint. Written by Mary Fabyan Windeatt.